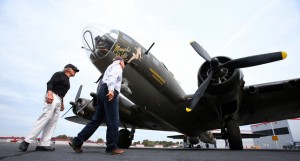 Former B-17 pilot Phil Arnot, 90, left, walks around the nose of the Boeing B-17 “Memphis Belle” with his friend Rod Liner, right, on Monday, April 21, 2014, in Hayward, Calif. Arnot , who was a B-17 pilot during World War II stationed in Europe and now lives in Lagunitas, toured the aircraft on display at the Hayward Executive Airport as part of the Liberty Foundation’s 2014 Salute to Veterans. The plane will be open to the public for flights and ground tours on April 26-27. (Aric Crabb/Bay Area News Group) ARIC CRABB

Philip H. Arnot Jr., 87, will receive the Chevalier of the French Legion of Honour for his meritorious service in France during World War II.

The Chevelier (which means knight) dates back to 1802 when Napoleon Bonaparte created the honor as France’s highest award given by the French Republic for outstanding service to France.

While thousands of French World War II veterans received the honor, the Chevelier has only been given to 43 Americans.